A Lizard Ate My Broccoli 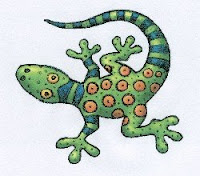 Does Your Book Have a Compelling Title? Did the title of my blog make you want to read on?

Your book may be wonderful, however what if no one ever looks at it? That’s why it's necessary to choose a title that is a hook. It must be catchy and grab the attention of your potential readers. Don’t lose sight of the fact that your book is going to be on the shelf with thousands of other books. Anything you can do to help it stand out from the others will be influential in creating sales.

Make your title short and to the point. One of my favorite movie titles is one of the hardest to remember. “Borat: Cultural Learnings of America for Make Benefit Glorious Nation of Kazakhstan.” While this is an extreme example, it is a reminder that bigger is not always better. It’s not always an easy task to whittle your title down to a few catchy words.

Use the internet to help you. In today’s online world, it’s important to use key words that people are searching for. A check of the popular search engines can help you here. An internet search will also let you see how many other people have already used your title.

Of course, a catchy title is useless if it does not fit the book. The title should be intriguing enough to make people want to open the book and should not disappoint. There’s no point in just being clever if the title doesn’t fit.

Don’t do what I just did. My title has nothing to do with my blog. But it did make you look!

P.S. Does the title The Belly Button Fairy make you curious?

Bobbie Hinman
http://bestfairybooks.com
Posted by Fairy Lady at 6:07 AM 2 comments:

Do You Know the Origin of Jack and Jill? Do You Like My Modern Version? 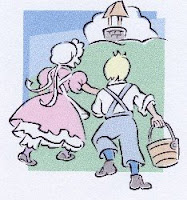 As a children’s author, I have always been fascinated with the real meaning of nursery rhymes. Few among us did not grow up listening to these rhymes. However, if you read these same rhymes carefully as an adult, you may find yourself wondering why they didn’t scare us to death. Take Jack and Jill for example. This simple rhyme may be based on some frightening actual events.

There are a number of theories about the origin of Jack and Jill, and the rhyme is thought to date back to at least the eighteenth century. Most historians seem to agree however, that the characters most likely represent King Louis XVI (Jack) who was beheaded (lost his crown). He was followed by his Queen Marie Antoinette (Jill) who was also beheaded (came tumbling after). It’s hard to believe that the words to this story were made into a rhyme for children.

Another interesting theory dates back even further. According to this one, in the early 17th century, King Charles I of England decreed that the liquid measurement of a “jack” (four ounces), and a gill (“jill,” eight ounces), should be reduced. However, he kept the tax on these amounts the same, making more money for him as the ruler. This was part of what led to the English Civil War (1647-1649), when Charles “fell down” (removed from the throne) and “broke his crown” (was beheaded).

Which story do you think is true? Take your pick. Or, is it none? Perhaps a nursery rhyme is nothing more than just a nursery rhyme. If that’s the case, what in the world is Jack and Jill really about?

No matter. I’ve come up with my own modern, slightly feminist, “girls rule” version:

Jack and Jill went up the hill,
To fetch a pail of water.
Jack fell down and broke his crown,
And Jill, being a physician with advanced training in emergency
medicine,was able to administer on-the-spot care.

Are You Afraid of Bugs? A Message From The REAL Little Miss Muffet 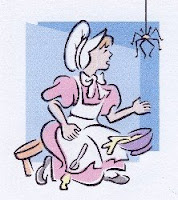 Is the fear of bugs something we are born with? Is it in our genes or do we learn it from a squeamish mother? Inquiring minds want to know.

My bug phobia started when I was a small child. My mother claims that I have had this fear as far back as she can remember. I have uncomfortable memories of the other kids in the neighborhood capturing fireflies while I ran around frantically, looking for an excuse to stay in the house. How can you explain how a harmless moth can send me into fits of terror? Or how a spider can leave me with a week’s worth of lingering nightmares?

One of my most embarrassing “bug moments” was a screaming fit that I had on the quiet streets of a country in Europe in reaction to a dragonfly landing on my shirt. (I won’t mention the country in case they are still looking for me.) Then there was the time I sprayed a centipede with hairspray because it was in my bathroom and I couldn’t get past it to get to the door. The hairspray was all I could reach. It worked, however my husband had to peel the sticky critter off the wall when he got home. I won’t even go into my reaction to the locust invasion!

Growing up in a house with no air conditioning (I’m kinda old); our windows were always open in warm weather. I can recall closing my windows every night and carefully eyeballing every square inch of my ceiling before turning out the lights. If there was even the teensiest of critters, I would scream at the top of my lungs until my father came upstairs to rescue me. As an adult, the best way I have found to deal with the problem is to quickly, and without looking too closely, place an overturned trash can over the bug and leave it for my husband. (I can’t even look at a bug without shivering.) A few years ago we had a terrifying ladybug invasion and I ran out of trash cans and had to use jars and glasses.

Lucky for me, my kids didn’t inherit the bug gene. I say “lucky” because I have always been able to call upon them to come to my aid. This gene must have skipped a generation. I’m glad Protective Services never found out that, even when they were toddlers, I “used” them in this way.

“They” say that we should face our fears. If this means that I would have to expose myself to more bugs in order to “get over it,” to that I say, “no way!!!”

Is there any hope for my family?

Bobbie Hinman
http://bestfairybooks.com
Posted by Fairy Lady at 8:11 AM No comments:

Fairy Lady
I am the author of a series of children's fairy books. I love to explain life's troubling mysteries by blaming it all on the fairies. The Knot Fairy tangles your hair while you sleep, The Sock Fairy - well, you know! The Belly Button Fairy makes sure that every child has just one! The Fart Fairy is responsible for the sounds and odors that are a part of everyday life! I am also the author of seven cookbooks, all devoted to healthful, lowfat cooking. My first cookbook series was published in 1984, at the height of lowfat awareness. The Lean & Luscious series is now available on Amazon.com. My most recent cookbooks, The Vegetarian Gourmet's Easy Lowfat Favorites and The Vegetarian Gourmet's Easy International Recipes, are available on Amazon.com and through Agate Publishing. I firmly believe that children raised with a lifstyle of healthful food and adequate exercise will feel better and experience a better quality of life.