How Many Years Does It Take To Become An Overnight Success? 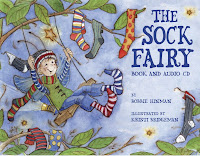 It has been an exciting month for The Sock Fairy. The book has received a gold medal in the Indie Excellence Book Awards, a silver medal in the Benjamin Franklin Book Awards, and was a finalist in the ForeWord Magazine Book-of-the-Year Awards.

Interestingly, while I was attending Book Expo America in New York last weekend, a fellow author told me how "lucky" I am to have a new book receive so much attention. It sounded as if he was implying that I wrote the book one day and received the awards the next day. Oh, if only that were true! The reality is that nothing could be further from the truth. I have been hard at work on my fairy series for about 4 years - writing, re-writing and re-re-writing. Then there is work of planning the illustrations, working with the graphic designer, writing the songs for the accompanying CDs, recording the CDs. Next, there is the planning and implementing of the marketing, the promotions, the school visits, the book fairs, the internet connections...

Yes, it is really a wonderful feeling to be noticed in a vast sea of books. I am so, so grateful for the awards my books have won (fourteen so far). I have learned that the harder you work, the luckier you will appear to be. I just hope all budding writers realize that the work has to come first.

http://bestfairybooks.com
Posted by Fairy Lady at 9:12 AM

Fairy Lady
I am the author of a series of children's fairy books. I love to explain life's troubling mysteries by blaming it all on the fairies. The Knot Fairy tangles your hair while you sleep, The Sock Fairy - well, you know! The Belly Button Fairy makes sure that every child has just one! The Fart Fairy is responsible for the sounds and odors that are a part of everyday life! I am also the author of seven cookbooks, all devoted to healthful, lowfat cooking. My first cookbook series was published in 1984, at the height of lowfat awareness. The Lean & Luscious series is now available on Amazon.com. My most recent cookbooks, The Vegetarian Gourmet's Easy Lowfat Favorites and The Vegetarian Gourmet's Easy International Recipes, are available on Amazon.com and through Agate Publishing. I firmly believe that children raised with a lifstyle of healthful food and adequate exercise will feel better and experience a better quality of life.